Kelly Haggerty, Anthropology student at Bloomsberg University of Pennsylvania, reflects on her experience with the Boruca during DANTA’s 2015 Methods in Primate Behavior and Conservation course in Costa Rica.

“I want you to just sit here for the next 10 minutes and feel everything around you. What do you think, what do you smell, what do you hear, and tell me…. do you feel them?” Pedro Rojas Morales said to our group of DANTA students. Pedro is the chief of the Boruca Indigenous peoples and he brought us to their spiritual waterfall our last morning in Costa Rica. There are four consecutive waterfalls where the Boruca’s Gods are said to be. He had explained the importance of each waterfall to us and stopped at the third which had an eighty meter drop to the bottom. Pedro promised that if we came back he would take us to the forth waterfall.

When I had made it to the rock where the third waterfall began, I felt as if it was one of the biggest accomplishments of my life. Not in the sense that I climbed astonishing heights to get to that point, but in the way that I am just a small town girl attending a state university in the middle of nowhere and all of the sudden, I am standing on one of the most well known waterfalls for a very famous Boruca indigenous reserve. I had always dreamed of amazing traveling experiences like this one but never thought I would be so blessed to live through one. I looked down the eighty meters to where all of the water was falling, looked up to all of the beautiful mountains surrounding, and then looked at Pedro where he had pointed and chuckled at me…. I started to cry. I felt invincible and anything in the world was possible in that moment. So to answer Pedro’s question, I did feel them. I felt the Gods overwhelm my emotions of blessings and gratefulness. That waterfall will forever have an impact on me positively and I hope everyone gets the opportunity to feel what I felt that day.

After the waterfall Pedro took us to a few of the locals homes where they make natural dye’s and traditional masks. Sixty percent of the 2,000 members of the Boruca community are artists, that is how they are best known. It was amazing to be able to watch their way of living because it is very different from ours. They work when they want to work, and they rest when they want to rest. There is no demand on when to get tasks done because they usually work for themselves.

After Pedro took us to a woman’s house where she showed us where she got her natural dye’s, we went to a little hut consisting of mask makers that called themselves the ‘Toros’. They are all related and they make the traditional masks for the community and for tourist to buy from a light weight balsa wood. Santos is one of the members and he told us their history explaining where the masks came from and it goes a little like this…

About 500 years ago Spanish colonization tried to take over the Boruca’s indigenous tribe. They had fought back wanting to stay self-governed and won, while many other tribes had lost and fell under the Spanish conquest. At this moment, a festival called “Fiesta de los Diablitos” or “festival of the little devil” had started to celebrate their success. The festival is a 3-4 day event usually around the time of new years. They wear masks of fierce animals representing themselves against one mask called “diablo” or “devil” representing Spanish colonization. As the years go on the masks become more fierce by showing teeth, brighter colors, and bigger horns. They still like to use traditional masks during the festivals.

After the Toros had shared their story I was curious to what inspired them to make such detailed masks. I had grabbed a translator and went over to one of the boys that was just starting at a piece of balsa wood… and he shared his story with me. He said, “to make a mask is simple…. you just have to feel the wood.” What ever the wood is telling him to draw he makes. The masks also reflect their emotions, so whatever they are feeling that day they apply to the wood. If they are feeling brave they will draw something strong and fierce, but if they are feeling sad they draw something whimpering. 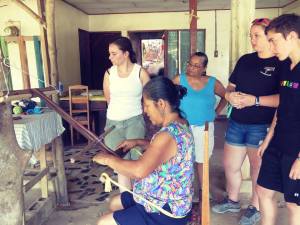 To say the least it was an honor to be able to stay a night with the Boruca Indigenous peoples and learn their beautiful culture. Everyone in the small village was extremely welcoming and sincere! I recommend that everyone learn of their story and to purchase a mask made by their amazing artists. They are also going to start exporting their delicious coffee beans that they grow right in their backyard.

I also want to thank DANTA, the organization that exposed me to all of these amazing experiences. DANTA is an international educational program specializing in training university students in conservation and sustainability. Kimberly Dingess, the instructor and organizer of DANTA, works hard to educate everyone on the importance of sustainability. If anyone is intrigued about my amazing experience with DANTA please apply! It is a fairly inexpensive trip for everything you get to see and learn! Also, a 2015 primate calender can be purchased online and proceeds go to building a new public school in the Osa Peninsula, Costa Rica.

Every penny counts to a brighter and preserved future 🙂